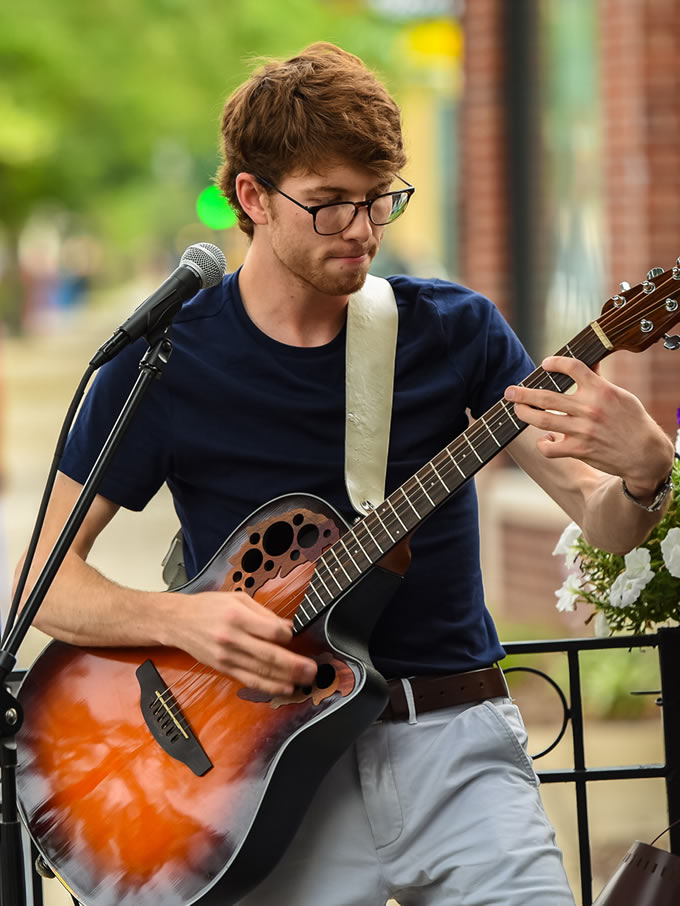 Ryan Pollock is the focus of this Foundation for the Benefit of Helias Catholic High School Alumni Spotlight.

A 2016 Helias grad, Ryan is currently a junior majoring in Music Composition at Columbia College-Chicago.

While attending Helias, Pollock spent all four years involved in music. He was a member of the show choir for all four years, where he played guitar. He then joined the Helias band his sophomore year. He started on saxophone, eventually progressing to include his guitar skills with the marching band. For his junior and senior years he served as the band's drum major.

Ryan credits former Helias band director Dr. Christopher Lair with not only helping the school band resurrect itself, but also helping him personally further develop his skill and ambition in the music field.

"He helped me as a musician in giving me so many opportunities and different outlets to hone my skills and better learn the craft," Pollock said about his former band director.

Aside from his school-sponsored musical endeavors while at Helias, Ryan also played in a band called The Vox. The band played numerous shows in the Jefferson City area, including during the city's annual "Salute to America" festival, gigs on the roof of J. Pfenny's, and at several other local music hotspots.

While he doesn't perform with The Vox any longer, Pollock does still perform as a solo musician in and around Chicago. Earlier this year, Pollock self-produced and released his first solo EP through his website (www.ryanpollockmusic.com) and all music streaming services. The artwork for his EP was done by fellow Helias alum Kaden Quinn (class of 2017).

After graduating from Helias, Pollock originally began his college career at McNally-Smith College of Music in St. Paul, Minnesota, where he attended until the school abruptly shut down in 2017. Faced with the decision of where to carry on his college studies, Pollock looked to his roots to make his decision and opted to follow in his father's footsteps.

Pollock's parents are both from Chicago, and his dad Bill Pollock attended Columbia College-Chicago to study for a career in radio. Growing up in a home where he regularly heard the school's praises from his father, the decision of where to continue his music education wasn't very difficult for Ryan.

Currently a junior at the school, Ryan also serves as the Public Affairs Director for the school's FM radio station, WCRX - Chicago's Underground Radio. He hosts his own weekly show, The Ryan Pollock Show every Wednesday night. He also oversees the station's public affairs programming, the Saturday talk show Public Service Announcement, and hosts another segment - Podcast Broadcast - on Sundays. He has also provided coverage of larger events for the station, such as the Lollapalooza music festival earlier this year.

Pollock also works for WGN Radio as a production supervisor. He got his start with the Chicago radio giant while working on an online series of podcasts called "Brews and Bands." On the show, they would meet with local musical artists or national acts either touring through or with ties to Chicago, and talk to them about their favorite beers, among other things.

Since signing on with WGN, Pollock has had the opportunity to help the station cover such events as the Pitchfork Music Festival in Chicago, and Farm Aid - the annual benefit concert founded by musical legends Willie Nelson, John Mellencamp and Neil Young and originally held in Champaign, Illinois, back in 1985. Nelson, Mellencamp, and Young all currently serve on the event's board of directors, which also includes multi-platinum artist Dave Matthews.

Despite his successes in such a relatively short time, Pollock believes that radio will only be one aspect of what he hopes to be a lifelong musical journey.

"Obviously I want to continue to perform music myself," Pollock said, "but I also want to have a career in radio. A lot of musicians get forced into keeping odd jobs to help support their growing music careers. If they "make it" then they'll give up those jobs and just live off their music. For me, I think my current job can really help me out in every aspect I want to achieve in music. My radio career can support the other avenues of my music career, and vice versa."

"I compose," Pollock said. "I like to compose for radio and media (films, tv, etc.). That's my focus at the moment. I also produce music for other artists. That's an aspect of my career that I want to expand."

When asked what advice he had to give any Helias students or young alums looking to forge a path in the music industry, Pollock didn't mince words.

"A lot of kids going into the arts either don't think they're good enough to get into the arts, or they're too afraid, or they're discouraged because they've spent so much of their lives being told that they can't make a career out of art," Pollock said. "That's just not true. At the end of the day it's just like any other career - you get out what you put in. It's a lot of work, but it's worth it if that's what you want to do."

"When you go to school, for art or anything else, it's different than high school," Pollock continued. "It's all on you. Mom's not there to take care of you. You're there to learn and craft your skill. Stay focused."

**To check out Ryan's music or follow his musical journey, feel free to visit his website www.ryanpollockmusic.com, or find him on Facebook or Instagram at @ryanpollockmusic, or check out his own radio show on WCRX - Chicago's Underground Radio at wcrx.colum.edu/the-ryan-pollock-show.


To nominate someone for the Alumni Spotlight, email info@heliasfoundation.org.